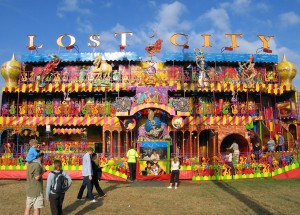 After the publication of Quests¸ I’ve been thinking for a while about a game project that would put into practice the various designs skillsets that I am trying to develop. The Aurora Toolset is one useful design tool, but it is only one of many options technologically. At the same time, acquiring skillsets without a project in which to showcase them is difficult and in some ways a little unproductive, since there is not much of a way to demonstrate one’s skills. Learning to program is fun and useful, and I’ll continue with it, but there ought to be a more tangible project to work towards in tandem with this. I’ve been slowly teaching myself C# and looking at various toolsets, starting today with the Unreal 2 Editor, and thinking about a mod group I could join or a project I could initiate myself.

I’ve always been fascinated with the virtual spaces of game design and their relationship to literary (and real) spaces, such as labyrinths and funhouses, so I was idly checking up on Austin’s most recent addition to its many haunted houses. The House of Torment is a run of the mill haunted house, distinguished only by its size and amount of gore, but it now has a sister haunted house: Illusion Manor. Ever since high school, I’ve often dreamed of an interactive funhouse that would hearken back to the adventure games and dungeon crawls of my youth.

Screenshot from The Demon

(I wrote a short story about one a long time ago which had little plot but a lot of description, because it was the space that mattered, and not just as thin self-referential postmodern metaphor as in John Barth’s Lost in the Funhouse. What mattered was the actual description of these dream-spaces, these architectural suspense novels that populated the amusement parks of the 1950’s but have all but vanished.) I’ve been disappointed that Richard Garriot’s famed interactive haunted house has been out of operation for years. But Illusion Manor is only in its second year, and what distinguishes it from the standard haunted house is that it requires participants to duck, crawl, jump, swing and otherwise navigate treacherous obstacles. Sounds a lot like a quest space, for those who have seen the last video that Kris Maxwell and I made.

So I was thinking about going to Illusion Manor for fun and inspiration. But, while making my first room in the Unreal 2 Editor, I noticed that the multi-colored grid on the wall could look just like a funhouse. And then I thought of an idea for a game in which players explore a surreal funhouse, built in the style of M.C. Escher and Giorgio de Chirico (the first featured near the end of our quest video and the second both my favorite painter and the direct visual inspiration for Ico, a game liberally featured in the same video). 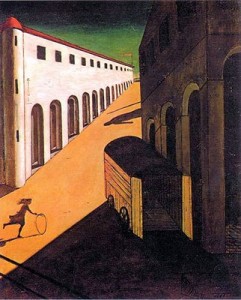 The Melancholy and Mystery of a Street by De Chirico

This would be a virtual Illusion Manor, but not slavishly so. Rather, it would hearken back to the funhouses of the 1950’s, many of which are chronicled in loving detail on this site. The game would be at its core a 3-D platformer in which players had to stay alive while navigating perilous environments, like swaying bridges, tilting rooms, and rotating tunnels. In terms of narrative, the funhouse was built by a mad genius dying of cancer, evangelizing about the necessity of fun for the human spirit. But the key word here is mad genius, meaning that many of the challenges are deadly. The core mechanic still needs development. Because I’m fascinated with magic systems, I’m tempted to include one in this game (à la the spell-casting FPS action of Undying, itself built in a heavily modified Unreal 2 engine), but that may be another game. Puzzles fit more organically into a funhouse if one thinks of midway games, but shooting ducks or wacking moles isn’t quite what I have in mind. Standard adventure fare (collecting keys to hidden doors) is more along tonally appropriate lines, and the 3D element is essential for the labyrinthine feel that I’m envisioning. If the environmental challenges were sufficiently interesting, combat might not be essential, but it certainly would make the game more exciting. Killer clowns and maniacal magicians with the look of the recently remade 1970’s exploitation flick Wizard of Gore might be even better, especially if I decided to play up the haunted side of this funhouse. That might justify players having weapons and spells of some kind.

But the space I am absolutely sure of, so I’ll start with the level design and overall visual/conceptual look first.

I can do a lot of the design work myself in terms of putting together a design doc and the first level prototypes, as well as scripting events and working on a core mechanic. Help with concept art, 3-modelling, and eventually programming would be useful. I’ll eventually need to assemble a team for this one. That’s why I’d like to put this idea out in the open: because the risk of someone taking an idea is less significant than the benefit of working collaboratively.

So, to sum up here are the key points:

Runes in the Magic System of Eternal Darkness

One of my next projects will be an article comparing the magic systems of various games, both conceptually and in terms of their underlying quantitative mechanics, as one example of how interactive symbolism can be programmed. As readers of Quests know, I regard programming as a form of procedural, interactive writing, which unfolds according to a set of rules that both constrain and facilitate player actions and interpretations. For example, the magic systems of role-playing games (tabletop, single-player, and MMO) comprise rigorous, quantitative rules for altering the physical and sometimes mental reality of a particular game world. Because these systems often involve glyphs, runes, and incantations, there are opportunities to encode meaning into a core game mechanic, as in the tabletop game Mage: The Awakening or the elaborate cosmology of Eternal Darkness.

Questions for research include: