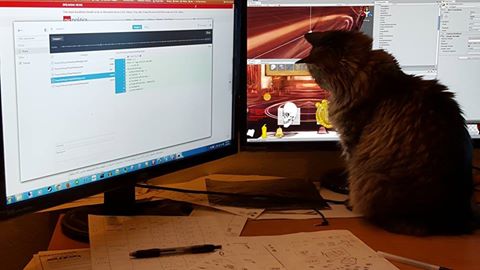 Recent Arcana progress has been slow but steady and significant, with advances both on the front-end (visual interface and feedback for ritual performance) and the back-end (underlying systems and mechanics driving the rituals).

For front-end progress, I am now working with an excellent artist, Thomas Vanhuffel, whose portfolio can be seen here: http://weenog.deviantart.com/ His many atmospheric art assets will be discussed in another blog entry:

For back-end progress, we are now extending physics calculations for n-dimensional metaspace.  Scott Graham, one of the coders on the project, brings to bear his advanced background in theoretical physics on this aspect of the project.  Meanwhile, Steve Graham continues to implement portions of these ideas in code, with help from me in prioritizing, carrying forward, and debugging the code.

The main idea is that for every visible ritual action performed by players, there are behind-the-scenes calculations of movement in a metaspace of infinite dimensions. So, when objects come into view or planes appear, this is because those objects are nearby based on mathematical calculations (specifically, the sum of all the distances across dimensions).
To accomplish a simulation of 6-dimensional physics, we create two 3-dimensional projections, i.e. abstracted representations of part of the metaspace showing only some of its axes (in this case, three at a time).  We call these zones metaprojection zones and have named them, respectively, the Shadow and the Umbra.  These two areas resemble shadowboxes located behind the main 2d interface area in which the player performs rituals.   Here is a screenshot of both views of the game (2d player view and both 3-dimensional projection zones). 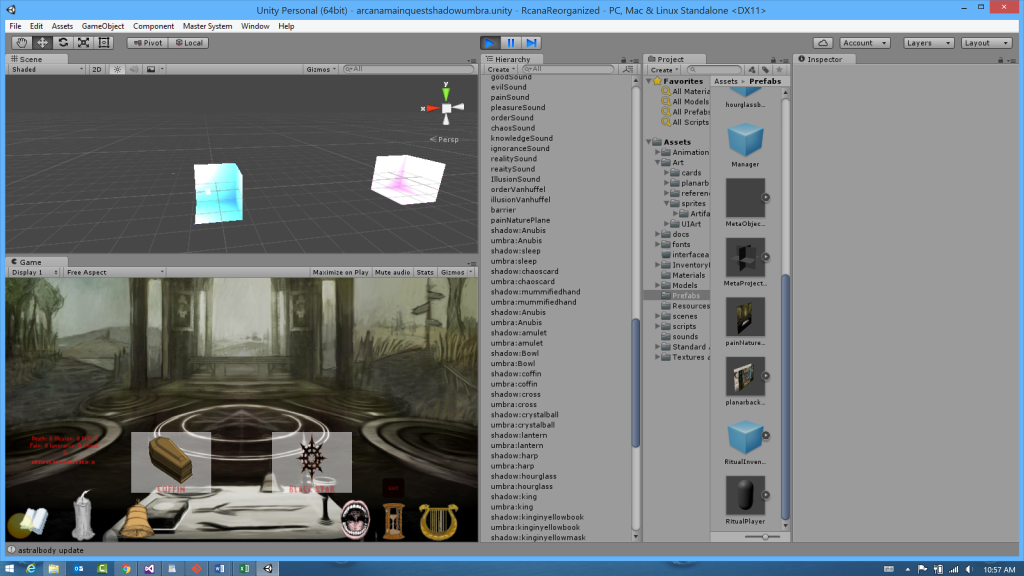 By tapping into Unity’s built-in physics system (and extending it past 3 dimensions), we can potentially implement all sorts of interesting gameplay effects, like rituals that make players move faster in metaspace, or barriers that bar players’ progress while astrally projecting. And working around those barriers (or breaking through them) gives an underlying logic to rituals that is emergent rather than just a sequence of actions.
For example, the player hits a barrier at +50 death, so they take a diversionary route along the pleasure axis: +20 pleasure.  Here, they are confronted with a barrier of infinite extent along the pleasure axis, so they chant repeatedly to build up sufficient ritual force to break through the barrier.  The player doesn’t necessarily know that they are navigating a maze with invisible walls: the player just observes that certain actions result in blockages, whereas others result in progress.
This video gives a glimpse into the interaction of the front end interface for performing rituals and the back end systems governing ritual logic: two meta projection zones (shadow and umbra) containing the two astral doubles of every ritual object.  In this footage, the player performs a ritual to project his shadow body (a cube) outward through metaspace.

The best visual equivalent I can think of is Steve Ditko’s Dr. Strange illustrations, which suggest a Dali-influenced, wormhole-permeated, non-Euclidean maze of portals and passageways. 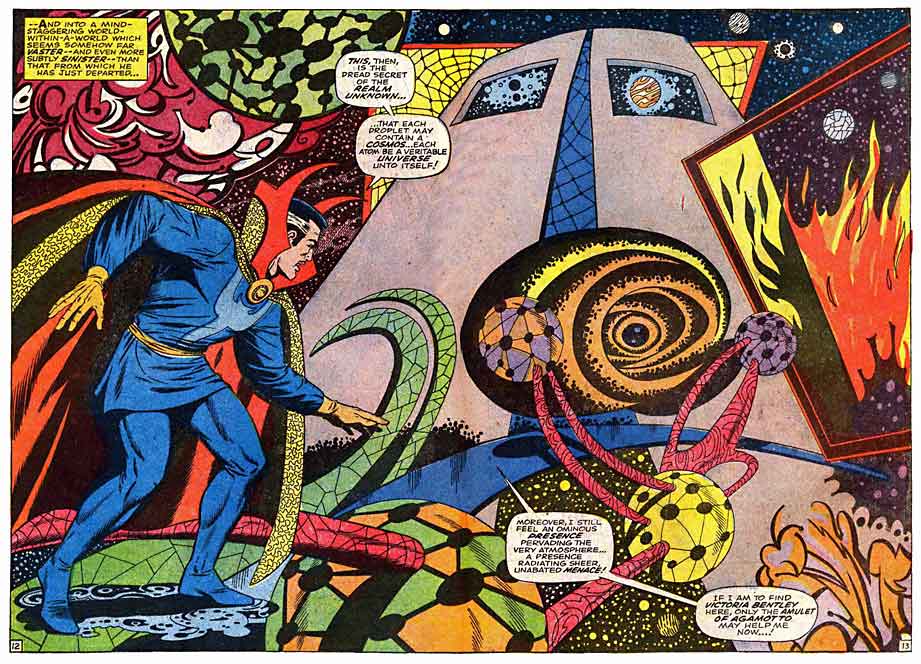 Speaking of visuals, Thomas Vanhuffel has been creating beautiful, atmospheric paintings of the various planes.  Not to be confused with the back-end mathematical dimensions (which represent continuous movement along axes), Vanhuffel’s planar backgrounds show particular realms of existence at the extremes of these axes: pure, Platonic abstractions of extreme Death, Life, Pain, Pleasure, Chaos, Order, Evil, Good, Ignorance, Knowledge, Illusion, and Reality.
The next blog entry will show off many of Thomas’ excellent paintings, but here is a tease of two current images, showing both planar backgrounds (pleasure and knowledge) as well as mockup of the surrounding interface. 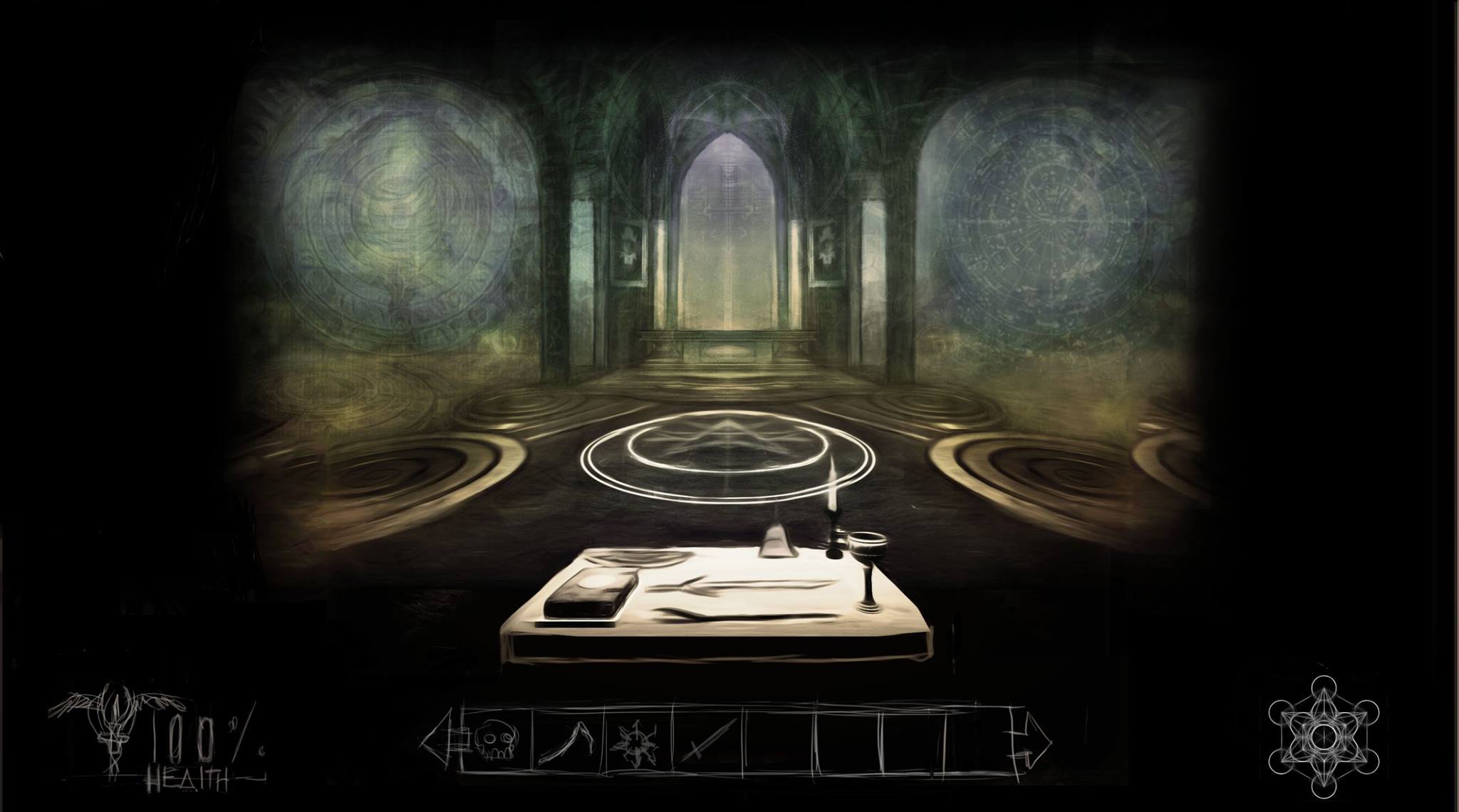 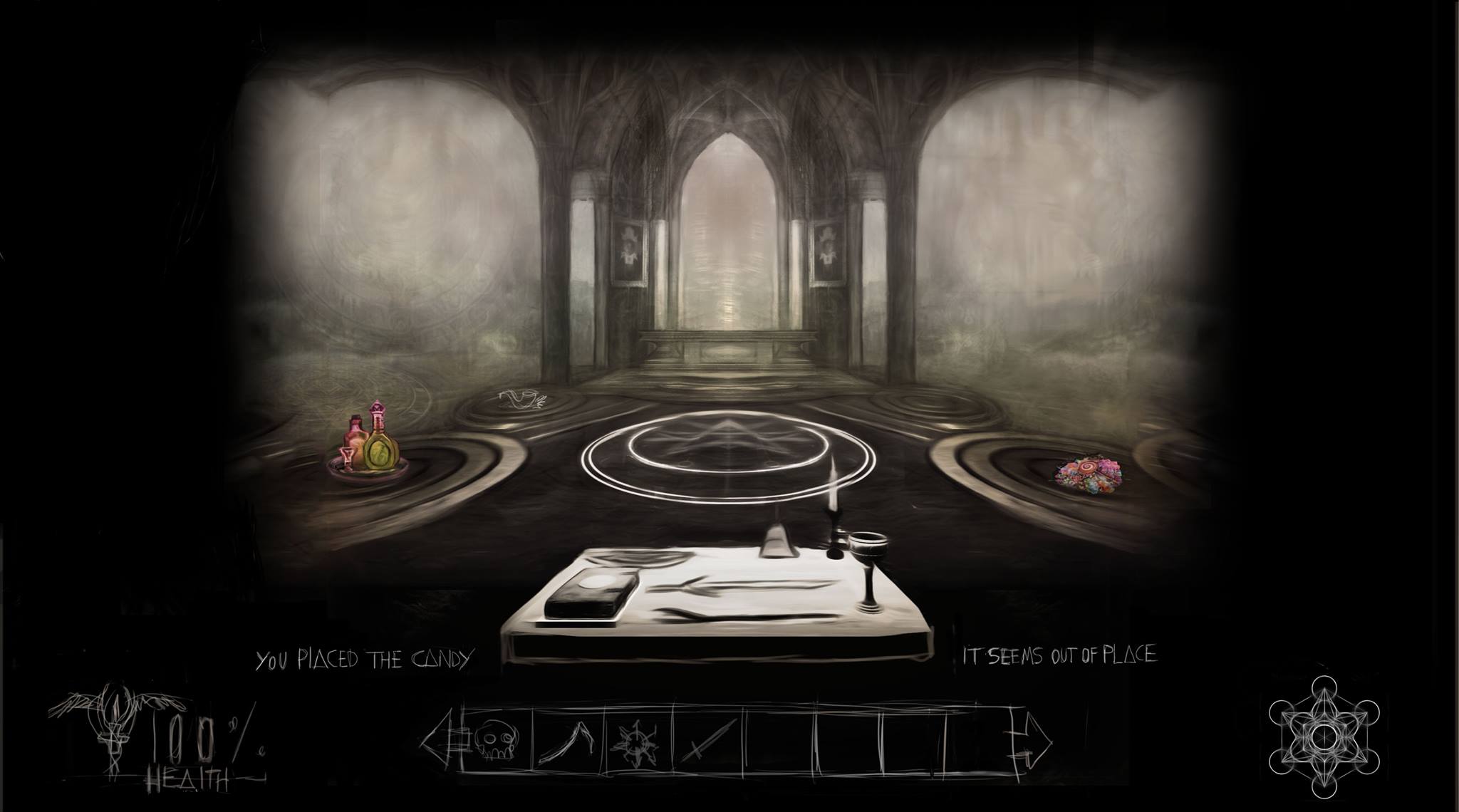