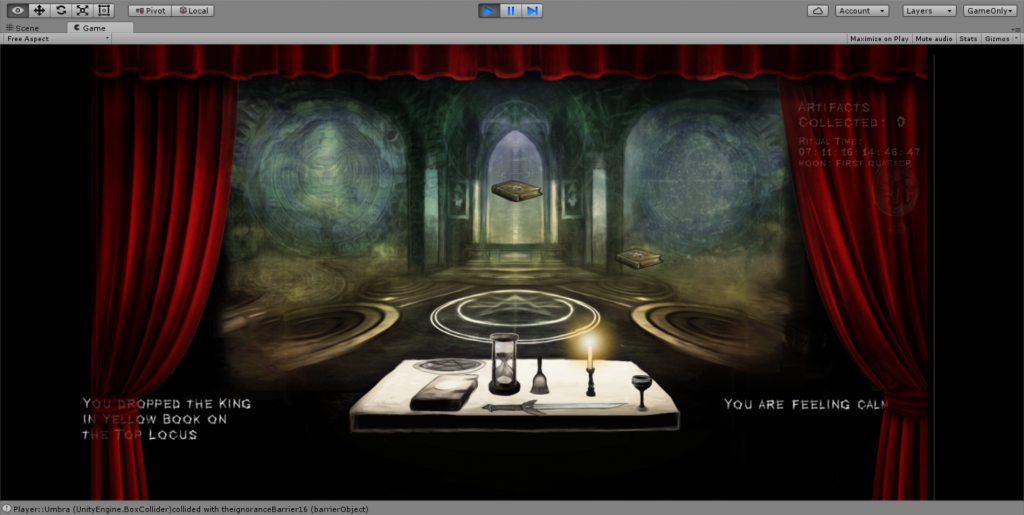 Jeepers.  After hundreds of hours of summer development, much of it full-time and often more than full-time, I appear to have a stable build of Arcana.  Not perfect by a longshot, but stable.  For those of you interested in the history of the project, I wrote a blog about that.  Tl;dr, I’ve been working on Arcana for 7+ years, with as many iterations of the project in different engines, with different teams and varying angles of attack.

For more detail, check out: my Youtube channel (with gameplay video, some of it narrated), my Twitter feed (with frequent, often daily progress reports), and the game’s Facebook page (an amalgamation of the two).  The game is also a practical manifestation of the theories and concepts in one of my books, Game Magic.

How do I know that this build is stable?  Well, I can now do the two things that I dreamed of doing for the last few years: by performing magic rituals, I can travel to the plane of Carcosa, and I can summon the King in Yellow from his dimension to our own. 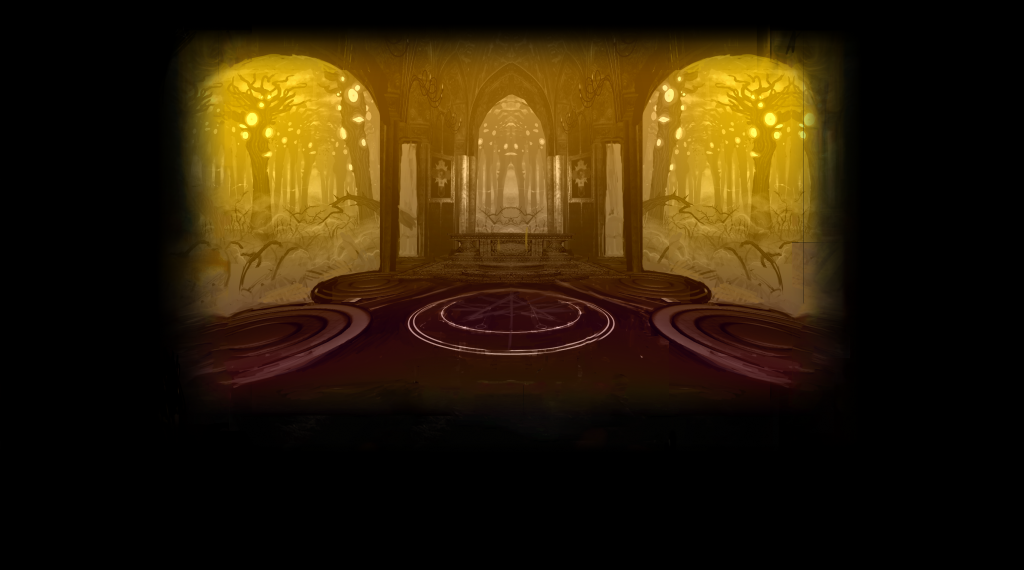 But more than that: I can do both of these things emergently, as the result of an underlying spatial logic consisting of an invisible n-dimensional maze of alternate planes of existence, the walls of which form barriers that players must circumvent or break through to perform astral projections and summonings.

There are no pre-scripted rituals in Arcana, but nor are the rituals random or procedurally generated (yet).  Each ritual action (lighting a candle, filling a cup, ringing a bell, placing an object in the temple) has an effect on the state of the ritual and the movement through the metaversal maze.  A ritual is a combination of actions that allows a player to perform a desired operation in the metaverse, and many combinations of actions can lead to similar results, as well as entirely unexpected outcomes.  The workings of magic are, after all, mysterious and hidden (the meaning of the word “occult,” as referenced in Howard’s Law of Occult Game Design, formulated in my 2014 GDC Online talk and published in the book 100 Principles of Game Design).  Players will never see the metaverse, but only learn of its structure through indirect audio and visual feedback.   However, there will be a toolset portion of Arcana (a level editor, akin to a Minecraft of Ritual Magic) that designers can use to create their own rituals and the underlying n-dimensional mazes that give them structure.

So, in the process of reaching Carcosa or summoning the King, players might take an unexpected detour through heavens, hells, and surreal mindscapes that weave in and out of various mythologies and cosmologies.  In the process of summoning the King, players might inadvertently hook and reel in all manner of planar flotsam and jetsam.  I liken the game’s core gameplay modes to astral bungee-jumping, astral bass fishing, and (eventually, in a later build) astral Simon. 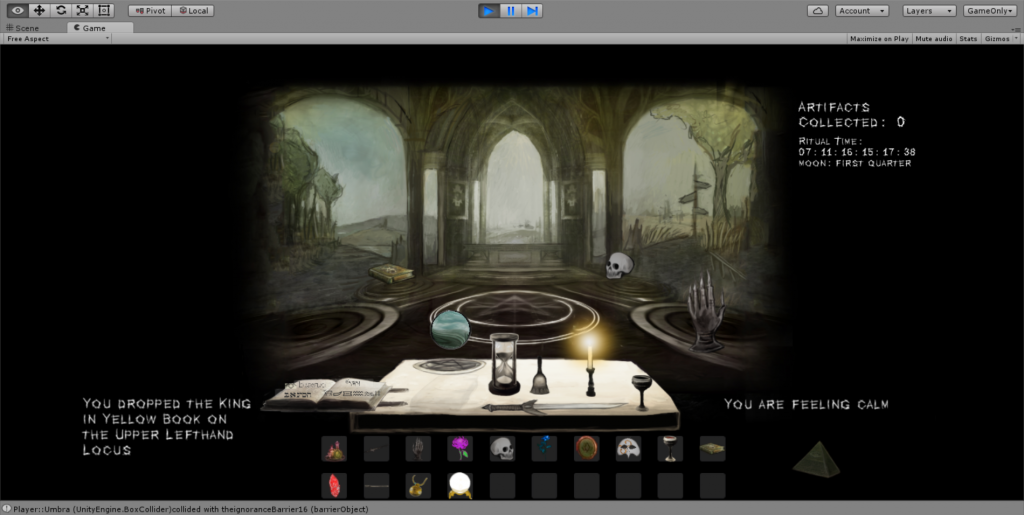 There is a passage in Michael Moorcock’s Elric of Melnibone, in which Elric makes elaborate ritual preparation to navigate an astral maze in order to summon his patron, the Chaos god Arioch, who returns to the mortal plane in the form of a fly.  That’s the core experience of Arcana.  An acid trip astral projection and summoning simulator in which players perform rituals to explore alternate realms of existence, gain otherworldly objects of power, and communicate with spirits and gods.

The progress over this summer would have been impossible without the creativity and diligent work of several team members past and present: Thomas Vanhuffel (lead artist), Damian Fox (who drew Carcosa, the King, and several artifacts), Steve Graham (lead programmer), and Scott Graham (programmer and design consultant).   Gene Semel is hard at work on audio for the game that will take its atmosphere to the next level.  Thanks to all these individuals for their work!

I plan to start a little bit of very focused testing and QA among a small group of friends, family, and those willing to put up with the many rough edges of an early prototype.  If you happen to be at Pacifica University on July 16, or at the Twin Peaks Festival July 22-24th, I’d love for you to try it out.